Home Grazing The power of nature

The power of nature

In traditional grazing they talk about grazing losses. This indicates that losses occur during grazing due to the walking of the cows and the trampling of crops that could also have been eaten.

It indicates that this 'expired' crop is not available for production but is lost.

This thought ignores the fact that a natural production model is built on the cooperation between plants and soil life. The soil life is very numerous and in weight greater than the weight grazing on the ley.

A nation that is fed grows! – Ado Bloemendal

Crop that is left behind and is expired benefits the soil life if it is too heavily grazed to recover. This part and the part that is recover, cover the soil and prevents the sun from reaching the ground with its deadly UV radiation for soil life.

The part of the plants that does recover often shows an amazing vitality, those plants often come out stronger.

What doesn`t kill you, makes you stronger!     –     Friedrich Nietzsche 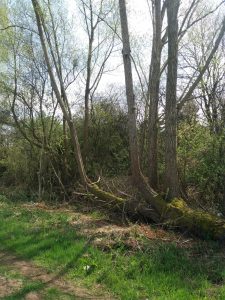 In the past, in the days of mixed farming, this property was used to make fuller a cereal crop that had grown too thin. It was grazed, after which a plant that had emerged with 3 stolons, grew back with 5 stolons, so that the crop as a whole generated sufficient yield.

Other plants, like a red clover for example, let the stolons each further develop as separate plants. This makes the crop thicker, fuller and denser. It covers the soil even better and provides more nutrition for the next grazing.

Many other plant species possess these abilities. As an example here is the photo of a blown willow, after which 8 branches have been further developed as a tree, all still obtaining their nutrition from the soil via the root system from the original mother tree.

Would you also like to let nature work for you?

Then choose the fodder production course!