Over the past few weeks we held six webinars about the management of herbal herbal leys in the spring, managing weeds in herbal leys is also discussed.

In herb-rich grassland it is not possible to spray against weeds; the clovers and herbs can't stand that and will disappear.

It is smart to work with nature and use the power of herbs and clovers to control and get rid of the weeds. In recent trials, researchers found fewer weeds the more complex the mixture was. They attributed this to the fact that the plants in the complex mixtures better met the requirements of the soil. soil.

Weeds perform several functions. The top part of the soil is full of weed seeds. They lie there until the bottom “wakes them up”. So does the soil when it experiences a deficiency. 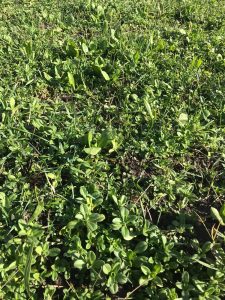 The cause of the emergence of weeds is therefore based on failure to meet the wishes of the soil.

A living soil is a “living organism”. It has universal goals. One of those goals is that the bottom wants to be covered at all times. Because the soil wants the best for the earth. She always wants to improve, to enrich.

Her goal in everything she does is to increase soil fertility. By increasing the organic matter and preventing it from burning.

A weed such as melde plays an important role in this. It germinates and emerges to improve the organic matter content of the soil by fixing it in the soil through the roots. With the leaf and the mass above the ground, it protects the soil from sunlight, so that the soil life cannot be affected by the UV radiation and the soil does not dry out. The above-ground mass also retains dew and thus also contributes to soil fertility.

Wall is a weed that "wakes up" the soil when there is an excess of N in the soil and the soil is uncovered.

If this takes place extensively on a plot, there is no other option than to till it as early as possible in the spring with a weeding harrow and to sow with a Saladebuffet Overseeding, if there are enough grasses. If they have also been pushed away too much through the wall, which is usually not the case, then the Salad Buffet that was used the first time can be used again.

If wall is a problem on the plot you want to sow, another option is to sow under cover crops.

The rye or wheat can be grazed or mowed in the spring for silage. The rye or wheat will also be present in the second cut, after which that place will be taken by the Saladebuffet