The easiest way to increase profits!

Farms with a high production of dairy per cow achieve this with a lot of input, with the constant danger that the costs exceed the benefits.

Recently, comparisons in cost between different dairy farms have been done. It is striking that the Dutch companies have established themselves in the absolute top.

However, the most productive companies are often those that perform the worst financially. They have to rely on the cash flow. As long as the incoming money flow comes in slightly earlier than the outgoing flow, things are going well. The rat race at its best!

They excel in low-return investments. What is striking is that the increase in the value of the land is largely transferred to the banks, after which the money from this new mortgage is spent on automating the milking, feeding, pushing the feed and keeping the slats clean.

Apparently there is a need for a lower workload. Understandable, because the neighbor and neighbor have a lot of free time. He has a 4 day job a week and she has a 3 day job. They also go on holiday 3 times a year.

At the time, my neighbor Palle worked 36 hours a week, in Denmark that was a full-time job. With us, milking alone already took 5.5/6 hours a day. That was already 42 hours, and when I milked, the rest of the work stopped. Palle NEVER worked weekends, we did EVERY weekend!

Standing before that choice, there are questions that are relevant in making that decision that is most promising:

Lets say; you would first reduce the cost price by 25% and then double the turnover, that would mean doubling your profit!!
But, pay attention to the order; build a low cost business first! 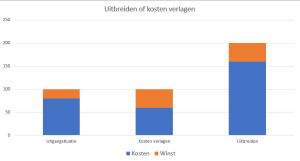 Our goal should not be to maximize productivity or minimize expenses, but to optimize the economic efficiency of the two.
Deployed at the right time and used in the right way, low costs can lead to relaxed business operations with a lot of free time that is not inferior to that of the civilian neighbours.

For us, cost savings resulted in a clearly low cost price and less work because the cows did the work. We invested in a good milking parlor and calf rearing, which resulted in a halving of the workload during milking to more than 1 hour at a time.

Do you also want a lower workload and a higher profit? Contact us today at Pure Graze.